A dingy, grungy apartment in early-1990s New York City is not the first place I would set a musical. But while I had my doubts, director Evan Ensign’s 20th anniversary tour of Jonathan Larson’s musical “Rent” (overall) did not disappoint.

At its core, “Rent” is a show about love, acceptance, and embracing life to the fullest while you can. The naming of the show says it all: we are all renting our place in this world, and we would be foolish to take it for granted, a lesson eventually, if not slowly, learned by our stubborn characters.

In a show about the ordinary lives of ordinary people, it is sometimes difficult to avoid falling into a pitfall of overselling the point in an attempt to make it seem relevant and important. Thankfully, the cast managed to avoid this trap, instead creating a gritty, honest hodgepodge of characters trying to make their lives mean something before it is too late. Led by the leather-wearing, guitar-playing Roger Davis (Coleman Cummings) and the ever-chipper, Jewish-American filmmaker Mark Cohen (Cody Jenkins), audiences are suddenly face-first in a musical about the fragility of life, embraced sexuality and the acceptance of death during the peak of the AIDS epidemic.

As Roger learns to embrace his diagnosis, Cummings pours his heart out in his song “One Song Glory” as Roger is desperate to write one last good song before his time is up. Cummings easily hits those smooth and sexy Broadway notes while effortless flowing in and out of the emotionally charged rock ballad that has been cleverly sprinkled into a very Broadway-esque number. While his pain and longing is palpable, there were a few moments that I wish had been just a little more rock ‘n’ roll, and instead were played just a bit safe and reserved for such a character.

As Act I continues, the production feels less like a story and more like a very long introduction to this band of misfits and society rejects. That is not to say it wasn’t entertaining, but parts of the show feel like marking time as we wait for the next character to have their moment to shine. That being said, each character’s breakout moment is worth the wait. Joshua Tavares shines as Angel Dumott Schunard, a cross-dressing drag queen who epitomizes love and self-acceptance. After finding and taking care of a recently mugged Tom Collins (Shafiq Hicks), they bond over their shared HIV-positive diagnosis and fall deeply and passionately in love. Tavares is wildly fun to watch as he struts around the stage in bleach-blonde wigs, impossibly high heels, a sparkly red coat and zebra-print tights during his number “Today 4 U.”

But the production’s true shining star is the gorgeously talented Aiyana Smash in her portrayal of the sexy and carefree erotic dancer Mimi Marquez. While all of Smash’s performance is carried out with a sort of seductive grace and ease, particularly her scenes with Roger as they fall in love, she stands above the rest in her rendition of “Out Tonight.” As she shimmies around a very cleverly designed set (thanks to set designer Paul Clay and the set adaption created by Matthew E. Maraffi) in shimmery blue pants and knee-high boots, Smash commands the room with powerhouse vocals and wild dance moves while never missing one jaw-dropping note. 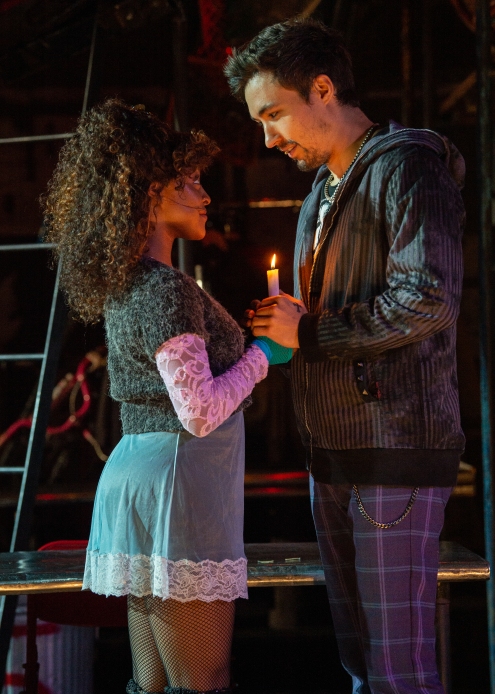 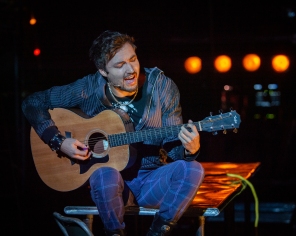 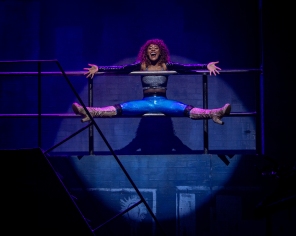 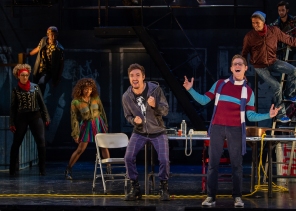 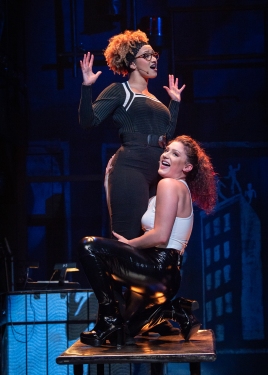 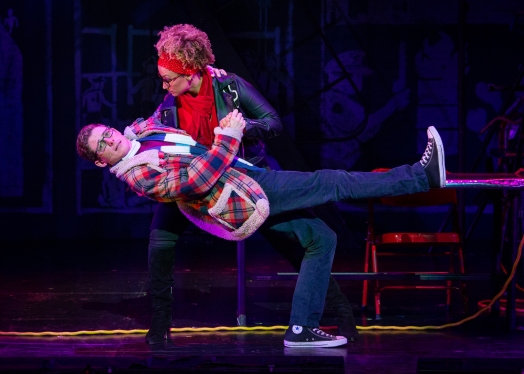 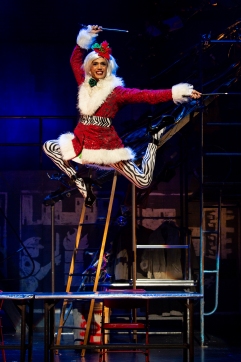 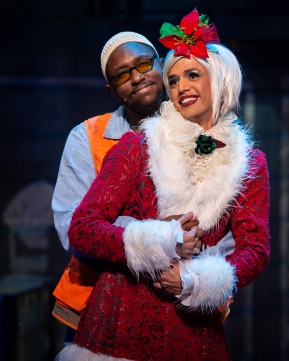 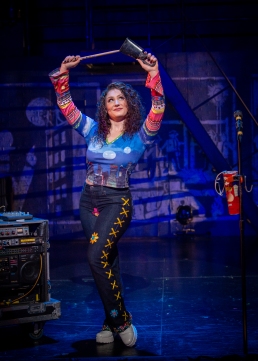 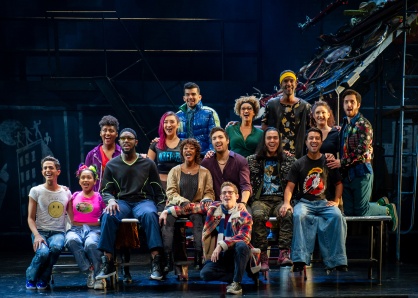 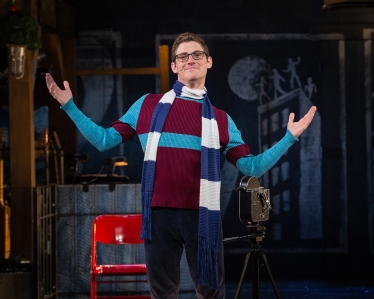 In contrast to the controlled chaos that is the life of Mimi Marquez, audiences are introduced to bisexual Maureen Johnson (Kelsee Sweigard), who is her own force of wildly chaotic bad-assery. Throughout the first act, she is mentioned by name, but never seen, by her former boyfriend Mark and current lover Joanne Jefferson (Samantha Mbolekwa). It is not until her completely nonsensical song “Over the Moon” that we see her face for the first time. While Maureen is an a capella-singing, cowbell-ringing, flower-pants-wearing mess, Sweigard is not, making very smart, intentional character choices (including a choice to pull down her pants and flash her bare butt to the audience) while her deep alto fills the room.

While each actor is given a moment to shine and introduced their character’s place in this mess we call real life, the final two numbers of Act I, “Christmas Bells” and “La Vie Bohème/I Should Tell You,” are a lot to take in. As each character is in their own world and singing about the problems they face, lyrics overlap until it just becomes indistinguishable noise set to music. While not the fault of the cast and instead a decision made in the original script, it is mildly disappointing for those of us that love that final “Oomph!” of a plot point right before the curtain sweeps shut.

Part of what has made “Rent” so successful for over 20 years is that is does not pretend to be something it’s not. While all the special effect bells and whistles that are so common on Broadway now are fantastically fun and cheery to watch, this production of “Rent” manages to entice viewers with a fairly classic set and staging quality of Broadway days gone by. Although the AIDS epidemic is no longer the death sentence it was in the 1990s, the production has managed to stay relevant across several decades, telling a story of love, acceptance, and kindness with energy bursts that just hit you like a firework.

Morgan Politzer is a senior journalism major and can be reached at morgan.politzer@gmail.com.