McKeldin Mall was more colorful than it is on a usual Sunday during the Hindu Students Council’s annual Holi celebration, marking the arrival of spring. The event was organized to celebrate the Hindu holiday, which was on March 20 and 21.

Traditionally, castes, gender, age and status are disregarded for the celebration. Participants throw colored water and powders on one another, and at the conclusion of the holiday, participants bathe, put on white clothing and visit with friends and relatives.

In celebrating Holi, many Indian cultures tell the legend of Holika, the sister of Hiranyakashyap, a demon king. The king demanded that everyone worship him and him alone. His son, Prahlad, refused to do so, instead worshipping Lord Vishnu. Enraged, the king tried several times to kill Prahlad. Each time, Vishnu protected Prahlad.

Finally, the king asked Holika to sit in a fire with Prahlad on her lap. Hiranyakashyap knew that Holika had a garment that would protect her from fire and allow her to escape unscathed. However, both were unaware that the garment would only protect her when she wore it alone, so when she tried to kill Prahlad, she died. Prahlad was saved by Vishnu. Thus, Holi was named for Holika to celebrate the triumph of good over evil.

To Greeshma Anand, a neurobiology major, Holi means the welcoming of spring and introducing “all the new colors coming in this season.”

Abiraa Nandakumar, freshman public health major, said she loved the idea of celebrating Holi on McKeldin Mall. “It’s so much fun,” she said. 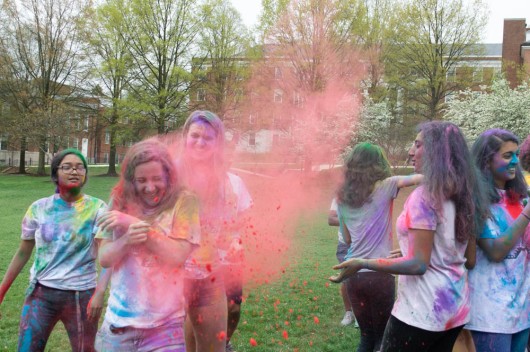 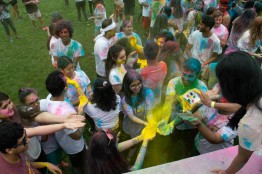 Colleen Neely is a freshman journalism major and can be reached at neelyc@terpmail.umd.edu.