As Beetlejuice haunts his way to the stage, this is one name you’re definitely going to want to say.

Based on Tim Burton’s 1988 iconic movie of the same name, director Alex Timbers’ “Beetlejuice” (the musical, the musical, the musical) is a Halloween music video, magic show, quick change act, rock concert, and musical rolled into one. This “show about death” may be the only time it’s ok to sing, dance and make gut-bustingly hilarious jokes about being dead without crossing the line into uncomfortable and disrespectful.

As two storylines merge into one, the worlds of the living and the dead collide.

The musical follows the story of the angsty and depressed teenage Lydia (Sophia Anne Caruso) as she mourns her mother’s death, much to the dismay of her perky, new, fairy-princess-of-a-life-coach Delia (Leslie Kritzer). When Lydia’s business tycoon father Charles (Adam Dannheisser) moves them into a new house, she accuses him of forgetting her mother and desperately looks for excuses not to leave the house that holds her mother’s memory. While brooding away in the attic, Lydia is drawn to the ghosts of Adam (Rob McClure) and Barbara (Kerry Butler) Maitland, the house’s previous owners. After realizing they want the same thing, they agree to help Lydia convince her father the house is too haunted to live in. 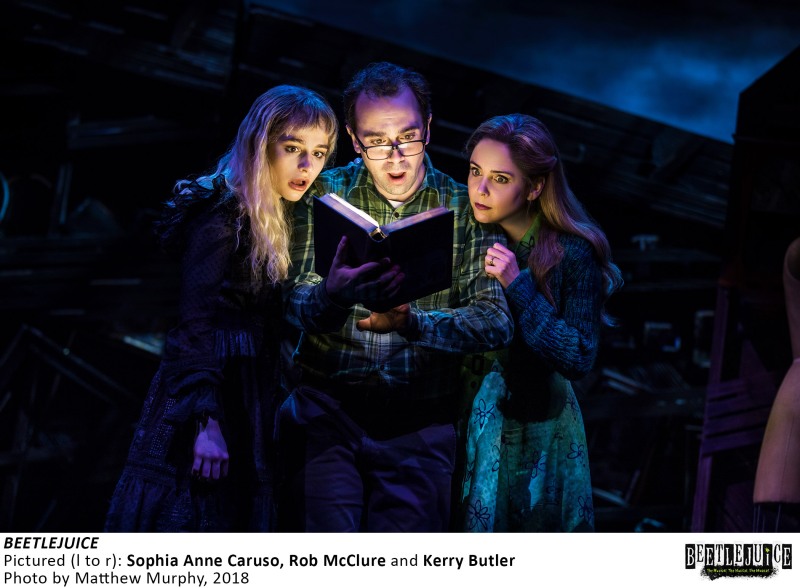 A demon straight from the depths of Hell, Beetlejuice (Alex Brightman) is like a ghoulish version of Rumpelstiltskin, only with darker powers and a more maniacal gleam in his eyes. As a creature only visible to the dead, he is desperate to become a real person and terrorize the world of the living. After haunting her mother’s funeral and seeing Lydia’s utter loneliness and desperation, he comes up with a plan to convince her to say his name three times — the only way he will no longer be invisible to the world above.

As part of his scheme to wreak havoc on the lives of the innocent, Beetlejuice decides to kill Barbara and Adam, an innocent, doe-eyed couple whose scariest ghost tactics are well-timed outbursts of “golly!” and “gee whiz!” McClure and Butler are perfectly awkward and gloriously geeky as Butler becomes a housewife version of Snow White, so drastically different from Beetlejuice with his rotting teeth and electrified, multicolored hair.

Downstairs, Lydia is forced to face her own demons. While she sweeps around the house in black like an oversized blonde bat, Delia is the human incarnation of a rainbow unicorn. With her flouncy dresses, glittery high heels and fringy crystal jewelry, she tries to life-coach the unteachable Lydia and show her the bright side of the universe.

After Adam and Barbara failed to scare Charles out of his business deal, a distraught Lydia contemplates suicide, only to be distracted by the eccentric Beetlejuice, becoming the first living person to be able to see him. Staring as the title character, Brightman is a force to be reckoned with. With his scratchy voice, powder white face and iconic striped suit, Beetlejuice is the character musical theater so desperately needs. As he convinces Lydia they can help each other out, stranger danger goes out the window. A flashy musical number with a singing and dancing homicidal maniac with green hair ensues as she agrees to a plan that would possess her father and force him to do her bidding.

When analyzed on their own without any of the spectacular special effects, brilliant sets and upbeat tempos, the songs in the show are really quite frightening. Dreary lyrics are intertwined with lyrics that would normally warrant a call to the police. And yet, Eddie Perfect’s music and lyrics have somehow managed to not only make them socially acceptable, but wildly funny with the perfect amount of subtlety (or lack thereof). When they’re sung by the gorgeously talented Caruso, the theater becomes a rock concert as she sings with a kind of power that rivals the greats of classic rock, showcasing her incredible range in her rock power ballad in Act II. 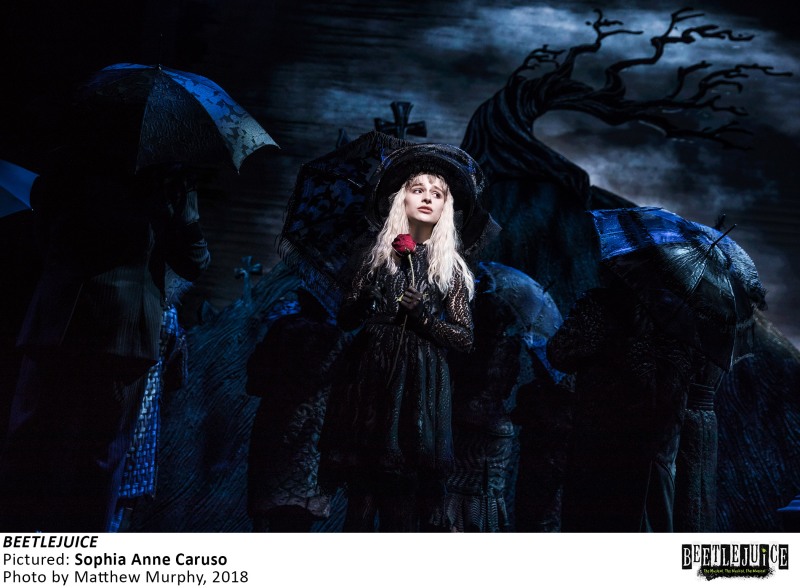 While the second half of the show never misses a beat, it does begin to subtly address more serious subjects. Boy Inferno, the flame-print-wearing, harmonizing pop gods of an undead boy band, put Lydia on the path of self discovery and repairing her relationship with her father, all while proving their potential to be the next teenage heartthrobs.

As Lydia and her friends search for a way to defeat Beetlejuice and banish him to the Netherworld, they put a satirical spin on the #MeToo movement and the culture of sexual harassment. Lydia sings about her very own “creepy old guy” in a song that is so wonderfully ridiculous, audiences are forced to realize it rings of truth.

This “show about death” could not have been brought to life without scenic designer David Korins, lighting designer Ken Posner, projection designer Peter Nigrini, puppet designer Michael Curry, special effects designer Jeremy Chernick, and illusions creator Michael Weber. Their brilliant use of lighting, projections, special effects and props turned the production into a clever, spooky-filled magic act as characters levitated, were possessed, and multiplied on stage.

Deliciously raunchy and unapologetically sexual, it’s about time we had a show like this on Broadway. Full of all the elements that make theater so lovable, Beetlejuice is also a step into the modern era as it is chock full of what has made recent musicals like “Waitress” and “School of Rock” so successful — dirty humor and modern pop culture jokes.

A horror movie, comedy show, musical, and Las Vegas act rolled into one, “Beetlejuice” holds extreme promise as it prepares to make its Broadway debut. You’re definitely going to want to “say the B word.”

Beetlejuice will run at the National Theater in Washington DC through November 18 before premiering on Broadway.

Morgan Politzer is a junior journalism major and can be reached at morgan.politzer@gmail.com.