Mel Madarang, a sophomore journalism major, said she can relate to what the women of Saturday Night Live talked about in their “Welcome to Hell” skit, which aired Dec. 2.

SNL’s skit was in reaction to the sexual harassment scandals that surfaced since the original Harvey Weinstein scandal broke Oct. 5. Through the skit, the female cast tries to explain that women live their lives to avoid potentially being sexually assaulted.

Madarang said that nothing in the video was new to her, considering she too gets nervous walking around late at night and even carries mace with her to protect herself. She said she related specifically to the part when Aidy Bryant said “Oh, and this ain’t a girl group, we just travel in a pack for safety.”

In the skit, Bryant, Cecily Strong, Leslie Jones, Kate McKinnon, Melissa Villaseñor and host Saoirse Ronan star in a Katy Perry-esque video with vibrant colors and upbeat music. The women wear extremely bright clothes and talk in stereotypical baby doll voices, all while discussing the controversial topic that has rocked the news for the past couple of months.

“Despite the whimsical Katy Perry look, with floating cherries, clouds and giant lollipops, the video didn’t sugarcoat the growing list of issues women face ― and have faced for centuries,” read a Huffington Post article.

Since the Harvey Weinstein scandal was exposed in October, more and more women have come out about sexual harassment allegations against other men, like Senator Al Franken, Senate candidate Roy Moore, NBC talk show host Matt Lauer, and many more. Some have mentioned President Donald Trump, who openly talked about groping women in an Access Hollywood tape.

Strong opened the skit by saying, “Hey there, boys, we know the last couple months have been insane,” to which Bryant says, “All of these big, cool, powerful guys are turning out to be, what’s the word, habitual predators. And it’s like, dang, is this the world now?”

“Oh, this been the damn world,” Strong responds.

The cast brings it home that although these allegations are just coming out now, life has always been like this for women by listing everything that has been ruined for them.

“Parking, and walking, and Uber, and ponytails, bathrobes, and nighttime, and drinking, and hotels, and vans,” they sing.

“Nothing good happens in a van!” Villaseñor sings.

The skit ends with everyone singing, “Yeah it ain’t fair, but pull up a chair, welcome to hell!”

Patrick Bortel, a sophomore journalism major, said he actually liked the way SNL approached the issue. Because it aired on SNL, Bortel said he didn’t expect them to talk about the scandals in a serious manner.

“They brought up serious topics,” he said. “I think they did a good job of balancing the fact that it’s a comedy sketch with a serious issue.”

While students on campus might have reacted positively to the skit, not everyone worldwide did. The video currently has 4,262,768 views and about 7,000 dislikes on Youtube.

Some commenters felt the video was “cringe-worthy,” while others argued the skit was just not funny. Others referenced treatment of women worldwide, specifically focusing on women in Saudi Arabia.

“Imagine they [sic] life of women in the Middle East,” youtube user Jybyrd Jybyrb commented. “Genital mutilation, honor killings, being tossed off the roof for being gay. You think Hollywood is bad? Go visit Saudi Arabia for a week.” 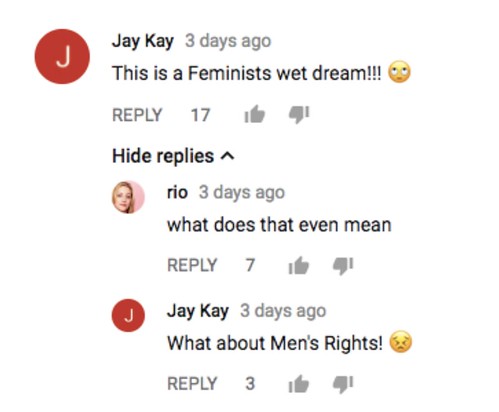 People in support of the video believed that most opposers were males who don’t believe these allegations, like youtube commenter Jacky s. H.

Although the skit has received mixed reviews, the cast of SNL felt strongly about doing it, cast members said. McKinnon was particularly moved by the skit. .

“It’s a real honor to have this kind of platform to speak about what’s going on at a moment when there’s so much to say,” McKinnon said in an interview with Yahoo Entertainment. “I just know that I feel so blessed, and all of my colleagues do as well.”

Sanchali Singh is a sophomore journalism major and can be reached at singhs97@terpmail.umd.edu.