SEE’s annual EDM concert, Fallapalooza, is one of the most anticipated events of the year, and for good reason. This year’s headliner, Snakehips, drew a massive crowd of students to Ritchie Coliseum. From the moment the lights dimmed, the crowd began to move as one, with seemingly every person in attendance dancing or jumping with the beat. Student openers, DJ Average Joe and Run Simba kept the crowd engaged for the first hour of the night, spinning bass-heavy beats on top of classic songs that had everyone singing along. When Snakehips was finally due to perform, many students seemed confused only one member of the electronic duo appeared onstage, but the solo Snakehips quickly proved he was able to produce a set just as epic by himself. By the end of the night, students streamed out of Ritchie dripping sweat. One sentiment seemed unanimous: Fallapalooza remains the fall event that cannot be missed.

After getting the crowd pumped up with his DJ set, Snakehips began to play some of their original songs, such as “Don’t Leave” and “Dímelo.” (Miranda Rosen/Bloc Photographer) 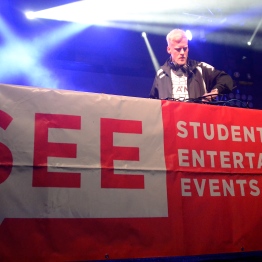 The entire crowd was singing and dancing along when Snakehips played his biggest hit, “All My Friends.” (Miranda Rosen/Bloc Photographer)

Snakehips managed to keep his set interesting and upbeat by throwing in new mixes on top of some of his original songs. (Miranda Rosen/Bloc Photographer)

Featured Photo Credit: Ritchie Coliseum was filled with a deafening scream from the crowd as soon as the lights dimmed, welcoming Snakehips to the stage. (Miranda Rosen/Bloc Photographer)

Miranda Rosen is a junior animal sciences major and can be reached at miranda.hope97@gmail.com.