Scores of teenagers and young adults lined the streets outside of the Fillmore Silver Spring Oct. 9. The tickets in their hands read “Ones to Watch Presents: The LANY Tour Part 2,” an apt title for a band that seems to be on the precipice of greatness.

L.A.-based pop-trio LANY has been touring non-stop for the past several years, playing in the DMV four times in the past 17 months. The Fillmore concert was their first time back since the release of their debut album, LANY, and featured a longer setlist that added new material while keeping all the old favorites. 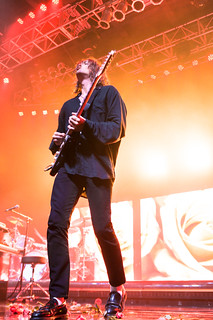 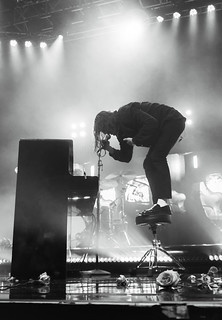 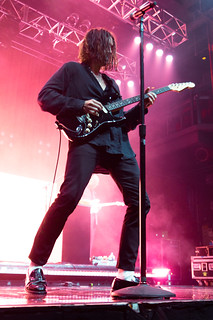 Klein performs on a rose-lined stage during the song “Flowers on the Floor.”  | Klein stands on a stool and sings during LANY’s performance.  | LANY frontman Paul Klein plays guitar during a performance at the Fillmore Silver Spring on Oct. 9, 2017. (Casey Tomchek/The Writer’s Bloc)

Norwegian pop-singer Dagny opened for the band, giving a performance that was easy to dance to and easy to enjoy. Closing off the set with her most popular single, “Wearing Nothing,” Dagny left the audience in high spirits, eagerly awaiting LANY’s entrance.

Not long after, the lights dimmed and the intro to the first song on LANY’s album, Dumb Stuff, began to play, prompting a roar of screams. The members of LANY entered the stage one-by-one: Jake Goss on drums, Les Priest on keyboard and guitar, and finally the frontman, Paul Klein.

The room was soon filled with the sound of Klein’s impressive vocals and musings on love and heartbreak. The most ardent fans, those who waited outside all day for the coveted front row spot, held roses. The romantic symbol appears on the album cover and has become a motif of the fandom, and it’s a tradition for audience members to toss them on stage during the song “Flowers on the Floor.”

Through the entire night, the crowd was beaming as they watched Klein dance along the rose-lined stage, witnessing what many fans refer to as the “Soundtrack to Their Youth” played out live.