While most children were sleeping in their beds waiting for Santa to come along, Run the Jewels had other plans for Christmas Eve. Minutes before the stroke of midnight on Dec. 24, RTJ’s third album, Run the Jewels 3, originally scheduled for release on Jan. 13, dropped unexpectedly on their website. Of course, having anticipated this release since Run the Jewels 2, back in October 2014, I spent all night listening to the new record.

As I spent the next few weeks with the album on repeat, my excitement grew for their concert at Echostage on Jan. 12. When that day finally came, I stood outside the venue waiting for the doors to open at 7 p.m. At 7:25, someone came out of the venue and announced a water main had broken in the area, and the show was cancelled.

Like any sad 20-something does, I went straight to ColdStone and drowned my sorrows in ice cream, not expecting to see the group until their tour concluded in March. When I received an update that the show was on just a week later on the 19, my anticipation shot through the roof once again.

When the day finally came around, it did not disappoint. Opening acts including “Old English” producer and DJ Nick Hook, rapper Cuz Lightyear, Three 6 Mafia legend Gangsta Boo and hairy Turkish DJ The Gaslamp Killer were great lead-ins to the main act, setting the stage for the incredible performances to come.

When Run the Jewels, made up of New York rapper and producer El-P and Atlanta rapper Killer Mike finally came out, the crowd went insane, and the pistol and fist hand gestures the band popularized were thrown up across the venue. The group lit up the stage and blasted through more than a dozen songs from their three albums.

When the night seemed nearly over, Killer Mike and El-P came back on stage and performed the song “Kill Your Masters.” This is where they pulled out the biggest surprise of the night when they brought out Zack de la Rocha, of Rage Against the Machine, to perform his verse and another song from Run the Jewels’ second album titled “Close Your Eyes (And Count to Fuck).”

The night ended with Killer Mike performing his song “Reagan,” denouncing the practices of the government, specifically under the Reagan administration, leaving a strong message with the people of D.C. the day before the inauguration of Donald J. Trump. 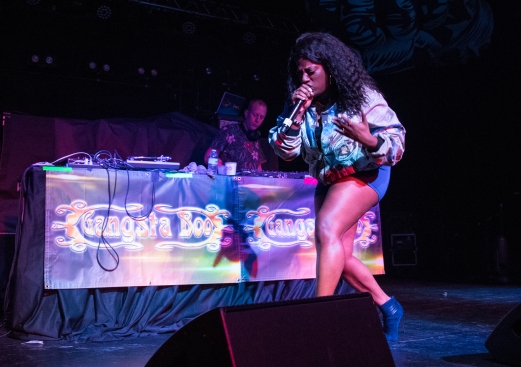 Gangsta Boo, the only female member of the legendary Memphis rap group Three 6 Mafia, performs at Echostage in Washington D.C. on Jan. 19, 2017. 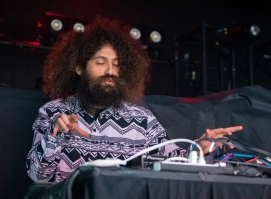 The Gaslamp Killer played a variety of songs, each with a heavy bass that shook the entire room while dancing erratically, flailing his considerable mane of hair around in the process at Echostage in Washington D.C. on Jan. 19, 2017. Killer Mike has been very politically active for many years, and recently got into some hot water over comments about Hillary Clinton, landing him on talk shows across the country in order to defend himself from misinterpretation. He still gives rousing political speeches at every show, stirring the crowd, especially in the nation’s capital at Echostage in Washington D.C. on Jan. 19, 2017. The performance on the 12th sold out weeks in advance, and when the show was moved to the 19th and tickets were made available again, it sold out once more at Echostage in Washington D.C. on Jan. 19, 2017. 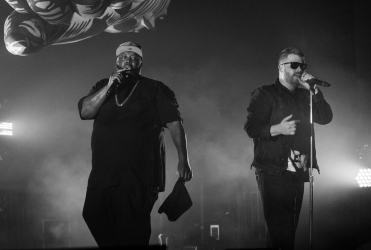 The RTJ duo met in 2012, when El-P produced Killer Mike’s entire album “R.A.P. Music,” forming a bond that would turn into Run the Jewels, arguably either artist’s most successful project to date, at Echostage in Washington D.C. on Jan. 19, 2017. Killer Mike and El-P who have both been active in the rap scene since the 90s, are both 41 years old, at Echostage in Washington D.C. on Jan. 19, 2017.

Featured Photo Credit: Killer Mike, known for his political activism, specifically on the campaign trail with Bernie Sanders this past year, speaks to the people of D.C. about where the real power lies, with the people, at Echostage in Washington, D.C. on Jan. 19. (Jack Angelo/Bloc Photographer)

Jack Angelo is a senior broadcast journalism major and can be reached at JackMAngelo@gmail.com.