Intensifying energy surged within the walls of Ritchie Coliseum Friday night, the source being a collection of thundering drum beats, strobing lights and satisfyingly shrill vocals.

Opening the night was University of Maryland electronic duo Todo Mas, compiled by junior jazz studies major Dean Emerson and senior jazz performance and music education major Joey Antico. The pair prepared the audience for the powerful bass and drums to come with mixes from their latest EP “Good Night And Joy Be With You.”

The naturally confident stage presence and passion the two exuded was well received by their fellow students; hands were clapping, raising and swaying upon command as Emerson and Antico pounded away on keyboard, soundboard and drums. Though Emerson stood the entirety of the performance, Antico, too, was rarely seated behind his drum set.

The 30-minute set effectively baptized the crowd with the upbeat energy in which BØRNS would further elaborate. 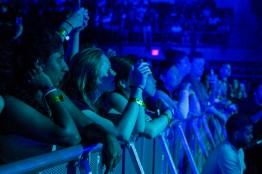 BØRNS, whose wardrobe consisted of a leather jacket over a white t-shirt, black skinny jeans, high socks and sneakers, causally and yet intriguingly meandered across the stage, circling his territory, twirling the microphone stand and all the while pulling each and every eye to his every move.

Neon stars illuminated the venue in accordance with the opening track, “Seeing Stars,” and then just as suddenly as they appeared, the cool color scheme was replaced by warm shades of yellow, red and orange for “Dopamine.”

The 24-year-old psychedelic idol had his audience feeding from the palm of his hand by his Elton John cover of “Bennie and the Jets,” of which they banded their voices together to create an anthem overpowering even the heaviest bass drops and electronic beats.

As BØRNS wandered to and fro across the stage, his fans followed suit and lost themselves in his music: hands raised, smiles spread across faces, heads gently shaking in time, eyes shining with the reflection of awestruck wonder.

The vibe of the show was vividly clear, clearer than the stunning lighting and twinkling electronic effects: relieve your mind of worry and stress and instead pursue the very depths of musical bliss.

BØRNS carried eager ears through 2015’s “Dopamine” album and prematurely ended the show with the hit “Electric Love,” a faux finale that momentarily interrupted his fans’ trances, all before returning to the stage to perform the mellow track “Clouds” and a cover of David Bowie’s “Heroes” as tribute to the late musical legend.

Many people strive their whole lives to attain an indescribable aura— one that changes the atmosphere around them simply as a result of their presence—yet BØRNS has that natural gift. He brings with him a charisma that begs for a following beyond his musical capability, one that connects with listeners at a transcendent, euphoric level.
As he descended the stage after “Heroes” to grace fans with his gentle touch and voice, he curated both screams and tears of disbelief, love and awe, concluding the night on a note of elation.

Featured Photo Credit: BØRNS performs at the back to school event hosted by SEE at Ritchie Coliseum. (Cassie Osvatics/Bloc Photographer)

Jordan Stovka is a sophomore journalism major and can be reached at jstovka@icloud.com.