With a sold out show for The Summer Set and a line wrapped around the block outside of U Street Music Hall, the smell of teen angst was in the air. Boston band Handsome Ghost opened before The Summer Set with the title track from their EP, “Steps.”

I sat down with the front man Tim Noyes, 28, who is quite possibly the handsomest of ghosts. Before the show, we talked about music, life, being on the road and new music to come.

Cassie: Before music, you taught correct?

C: What was the decision to focus on music? Was it abrupt or did you slowly transition into focusing more on music?

Tim: When I moved to the city, when I was in New York, I was teaching English to mostly 9th graders, and I was doing music just in the evening …. and on weekends and just for fun. Slowly it became more serious, little bit by little bit, and eventually it was difficult to balance the two, so it was time to jump in or put it aside and I felt like it was time to give it a shot. But it was a slow build.

C: Before Handsome Ghost, you released a solo album. How did you transition from being a solo artist to being in a band?

Tim: It was fun; it was definitely a little challenging at first. Most of my solo work was like more folk, in the folk world, so it was really exciting to get to experiment with these new sounds and new production. It was just a lot of fun at first; it’s still very fun. But it’s just a different world and it takes a little bit of getting used to, like traveling in a big group. But it’s just a way better time, ya know, just being amongst your friends; at this point I’m pretty close with everyone in the band. It’s just a better touring experience for sure.

C: And with the Handsome Ghost EP, you worked with Matt Squire correct?

Tim: Yes we did, you know your stuff.

C: How was it different from working alone on an album to working with a producer? Were you still able to be as hands on and intimate with the music?

Tim: Yeah, I think Matt was fantastic. We had the album, or EP I should say, about 90 percent finished when we took it to L.A. to work with Matt, so it was really close. But I think he was really crucial in like bringing us to the finish line, like making the changes that we weren’t going to make ourselves. At first it was like, oh, man this isn’t necessarily how I envisioned it, but once we kind of established our rapport and our give and take, Matt and I, I felt like I actually agreed with a lot of his input and I felt like it was a really great working relationship. He was like the closer. We needed him to get it where it needed to be. I really enjoyed working with Matt. His assistant or protege … Steve Tippeconnic was really great to work with; they were a really great team.

C: Would you still be teaching if you weren’t in music or would you have gone a different route?

Tim: I think I would still be teaching; I really loved it. The kids were challenging at times; it was like a tough, for lack of a better word, a tough school. But there were so many good ones, just good hearted kids. I always liked to get up and go to work, so I would go back if music didn’t work out; I’d be completely happy. But the short answer is yes, I would be more than happy to go back if, for some reason, this band ended tomorrow, which hopefully it doesn’t.

C: How’d you meet the rest of the band and begin working together?

Tim: Eddie and I have known each other for many years now, maybe going on about five or so, I’m going to call that many years. But we played in another project together, a folk project, so I’ve known him forever. He’s one of my go-to collaborators, trust him, good guy, great player. So when the band started, he was just an obvious choice. The other two who are on tour with us now, Dillon [Treacy] and Caitlin [Bell], for the time being are joining us for the tour. It may turn into more …. they play in the live band. Eddie’s a little closer to a band member, but it’s been great, the tour’s been so fun. I hope we can keep this group together for a while.

C: Do you have any funny stories from the road?

Tim: Funny stories from the road. I feel like if I thought about it I could probably tell you like 5,000. This has been a funny tour. The first thing that comes to mind is we got caught in an absolutely brutal snowstorm in like mid-May … in Wyoming. We thought we were being so responsible …. We left the show and we were driving towards Utah, or wherever we were playing next. We were like we’re going to do three hours. We’re going to get a head start, we’re so responsible, then we hit this brutal snowstorm driving through the mountains. We were just going 20 miles an hour, the other two were asleep, so it was just me and Eddie like ok (making a shocked face). It was just awful, awful, awful. It took us like six hours to get where we needed to be and we finally stopped. Everyone was super late to the show, us included. I don’t know if that’s a funny story … but it’s a thing that happened.

C: While you’re on tour, what do you miss most about home?

Tim: I’m going to go with my dogs, that would be step one. I mean, I guess just being in one place for enough time to watch TV, watch Netflix, make a meal, just like the normal things that seem like not a big deal, but when you haven’t done them for like two months, you’re like aw I’d like to make a nice meal for myself tonight. And we’re staying in relatively grimey hotels every night, so just like the little homey things.

C: What do you guys get to do in your free time when you’re touring?

Tim: If we have time on an off day, we’ll try to do something fun and specific to a city. Like Seattle, we had a day off, it was awesome. We went down to the water and we walked through Pike Market, which I hadn’t been to, got seafood, just touristy stuff. But on the days where we have shows, unfortunately, I feel like we only see like a couple blocks because we just come to the venue and then walk around, grab some food, and come back. So if we do have the chance to do it, we’ll make an effort to go do something, to just enjoy the city.

C: What are your plans after the tour?

Tim: Finishing up our album. Super, super exciting. It’s almost done. We have some loose ends to tie up, but it’s just about done. It’s going to come out in the fall …. We’re going to play a couple songs from it tonight …. Graduate’s on it. It’s all new, nothing off the EP.

Tim: Law and Order SVU is my guilty pleasure …. A lot of the times, in these said grimey hotels, there’s pretty bad wifi so it’s hard to stream …. We have to watch USA, and we’re like ohhhh SVU. It’s like 30 episodes, like a marathon …. that’s the number one TV show. 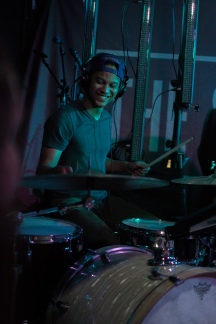 Featured Photo Credit: Tim Noyes of Boston band Handsome Ghost serenades an adoring crowd at U Street Music Hall. Handsome Ghost is a currently opening for The Summer Set on their Stories for Monday tour alongside Royal Teeth and Call Me Karisma. Pictured in the back is synth player Eddie Byun. (Joe Duffy/Bloc Photographer)

Cassie Osvatics is a junior secondary English education major and can be reached at cosvatics@gmail.com.