Editor’s Note: This article as well as its audio clips contain profane language.

The police officer looked down at the two children standing in front of her. They asked her whether her face piece was bulletproof. She smiled and said no.

It was not yet dark and we had been walking up and down Pennsylvania Avenue, exploring the silence.

Mondawmin Mall, which had been looted and burned the night before, was deserted. It was surrounded by police officers who sat  in small clumps of two or three, holding weapons.

Individuals walking down the street told us the shops had been open yesterday, but nearly all of them seemed closed today.  Sam Stewart, one of the only active business owners Tuesday, owns a oil change and brake service shop and used tire shop off of Pennsylvania Avenue.

Stewart was conversing loudly with a man, who seemed like his friend, about the protests when we walked up. He said he wanted everyone to talk about what happened like educated people.

“The protest last night was an event organized and done by individuals who really don’t have an understanding of what’s going on in society,” Stewart said. “The focus last night was purely on self, and not what to do as a whole and as a community.”

He said his shops were not necessarily harmed.“What are they going to do, roll the tire up the street?”

We walked down Pennsylvania Avenue and spoke with people sitting on their porches. They had witnessed the riots the night before.

Timmy has been living in Baltimore since 1998.

“I just basically stayed in the house, go back and forth to the window, check on my next door neighbors,” he said.

We passed by Family Life Global Ministries and they gave us water bottles, inviting us in for prayer. They had met with the Bloods, Crips and the Black Guerilla Family the night before to discuss methods of peace.

Michele Spence is a member of the church, she has lived in Baltimore for 48 years. She said she witnessed the protests on Monday night.

“My husband and myself were trying to get the children not to throw rocks and not to act out,” Spence said. “I just felt obligated to apologize to the police officers who were out there risking their lives.”

As she walked past each group of police officers, she and her husband apologized to them and said they wanted to bring peace to the city.

A few yards up the road, several hundred protesters emerged over the crest of the hill chanting: “We want peace.”

The peaceful protesters passed honking cars and an artist’s house off of Clifton Avenue, a few blocks away from the main protests.

Plastic dolls painted black hung from the tree. They had their hands tied behind their backs and seemed to be lynched. Most were babies, others were children.

Members of the surrounding community stood and hugged each other. They said the art was called “Strange Fruit,” probably in reference to the Billy Holiday song. Black bodies hang like strange fruit from the tree.

Thirty-eight year-old Aaron Greene has always lived in Baltimore. He was standing below the tree.

“It’s about people who have the authority and what they do with it,” he said. “White folks are getting killed too. It’s just disproportionate.”

The protesters gathered at the intersection of West North Avenue and Pennsylvania Avenue. Peaceful protestors gathered with over 25 local marching units including Dream Nation, Baltimore All-stars, Twilighters, Baltimore City Entertainers, and other local bands to celebrate peace and unity.

About an hour into the parade, while it was still light out, police lined up across West North Avenue, and community members linked arms in front of them, chanting: “This is Baltimore.”

Standing in the front line of the protesters in front of the police was a man wearing a red bandana around his neck. He discussed the misconceptions about gangs.

“Just because we have these on,” he said gesturing toward his bandana,“doesn’t make us bad people.”

He asked to remain anonymous.

A woman, who identified herself as “Sin” said she was fifteen years old and a Crip member. She tore the purple bandana from her lips while speaking about her decision to join a gang. She stood arm in arm with a man wearing a red bandana.

Symone Brown has lived in Baltimore her entire life. She currently lives on West North Avenue, where many protests took place. She stood with a friend and watched protesters link arms in front of a line of police.

“As a young woman growing up in Baltimore, that’s what people don’t understand, we have to do that,” Brown said.

“I don’t agree with them burning the buildings down, but I definitely understand,” she said. “But look, it got everybody here. Everybody can see that we’re not playing.”

Brown says she does not condone the looting that happened Monday night, but she understands why it is happening.

As it began to get dark, hundreds of protesters swarmed together. Most were standing quietly, talking with friends. The volume of the crowd had more to do with the number of people than for sake of shouting.

When asked why they were there, nearly every individual said to support his or her community. Police helicopters continued to drone overhead and the faces of protesters’ faces were illuminated intermittently by the bright searchlight of a news helicopter.

Individuals held signs that read “Justice for All” and “Justice and Peaceful.”

The Bloods and the Crips linked arms, calling for peace and claiming they would protect the city. One Blood, who called himself East Side Roq Roq.

“You’re not welcome here if you’re not about unity,” he said. “We ended wars for this.”

Sam Stewart, a Baltimore business owner, says Monday’s protesters were focusing on themselves and not the community. (Aiyah Sibay/Bloc Reporter)

“It’s not all about violence yo, it’s about peace, communication and shit like that,” a 15 year-old Crip, who goes by the name of Sin, says. (Aiyah Sibay/Bloc Reporter) 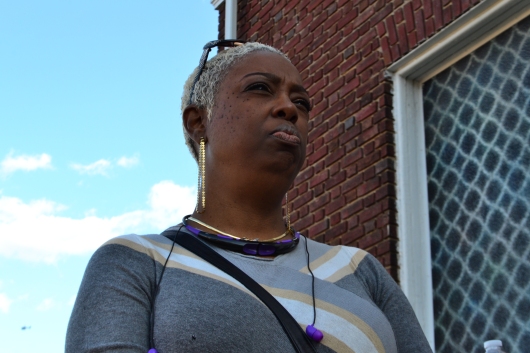 An anonymous sign is taped to the ruins of a CVS destroyed in Baltimore Monday night. (Aiyah Sibay/Bloc Reporter)

An inside look at what remains of a CVS that was ransacked by looters Monday night. (Aiyah Sibay/Bloc Reporter)

Raye Weigel is a freshman English and community health double major and can be reached at rayanneweigel@gmail.com.

Aiyah Sibay is a sophomore English literature major and can be reached at ak_sibay@hotmail.com.