Kyle Travers, last year’s annual drag queen prom fashion show winner, took center stage at the Cambridge Community Center as this year’s host. However, he did not go by his given name.

Instead, on Thursday night he was “Ms. Anya Kneez.”

Three contestants entered the competition to be heralded as the new prom queen. The event was reminiscent of the Ms. America pageant. It opened with a rehearsed Q&A session, followed by a talent portion, then an evening-wear catwalk, and concluded with a lip-sync battle.

The three contestants were Matthew Dohm, who went by Lady A. Deeyate, Anders Norberg, who went by Anita Man, and Connor Laughland, who went by Patti LuBones. Dohm was eliminated after the first round of voting. Laughland went on to claim the crown after a heated lip-sync rendition of “I Wanna Dance with Somebody” by Whitney Houston.

Event organizers drafted signs that audience members could pose with for a photoshoot. (Ryan Eskalis/Bloc Reporter)

Around 60 students gather in the Cambridge Community Center to watch this year’s annual drag queen prom fashion show. The room is decorated with tissue paper leaves, pink and blue streamers and came loaded with refreshments and music. (Ryan Eskalis/Bloc Reporter) 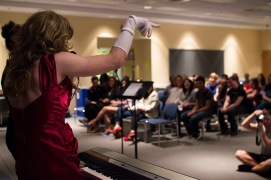 Dohm encourages the audience to chant “Lady A. Deeyate” in cadence with his song. Nearly everyone obliges and chants the eponymous phrase everytime he points his finger. (Ryan Eskalis/Bloc Reporter)

Laughland and Norberg take to the front of the room as the finalists in this year’s Drag Queen Prom Fashion Show. (Ryan Eskalis/Bloc Reporter)

Travers congratulates the competition finalists right before the final act of the night, a lip-sync battle. (Ryan Eskalis/Bloc Reporter)

Norberg threw his wig into the crowd and Laughland had a nip-slip during the last 30 seconds of “I Wanna Dance with Somebody.” Despite their wardrobe malfunctions, the two persisted until the end of the song. (Ryan Eskalis/Bloc Reporter)

Norberg threw his wig into the crowd and Laughland had a nip-slip during the last 30 seconds of “I Wanna Dance with Somebody.” Despite their wardrobe malfunctions, the two persisted till the end of the song. (Ryan Eskalis/Bloc Reporter)

Tonight’s contestants strut the catwalk in stiletto heels. They say the heels cause them discomfort but they persisted through nearly two hours of competition without taking the shoes off. (Ryan Eskalis/Bloc Reporter)

A couple snuggles in the last row of chairs at the event during Norberg’s rendition of “Titanium” by David Guetta. (Ryan Eskalis/Bloc Reporter)

Ryan Eskalis is a senior broadcast journalism major and can be reached at ryan.eskalis@gmail.com.