These are the kind of topics and questions posed in Vagina Monologues, a series of riveting acts written by playwright, performer and feminist Eve Ensler.

Ensler’s production portrayed the feminine experience and pushed the boundaries of taboo topics on stages around the world since 1996.

The university’s own rendition, performed every year by performance-based student organization The Vagina Monologues at UMD, hit Nyumburu Multicultural Center’s stage this Thursday and Friday with stories about sex, love, rape, genital mutilation and all important matters of the vagina. (Also known as the “pooky,” the “poopi,” the “monkey box,” or the “coochie snorcher,” as told by the Vagina Monologue-ers.)

First-time Vagina Monologues actress and senior criminology major Tatiana Taylor delivered one of the most captivating performances of “My Angry Vagina” to ever grace the College Park stage. 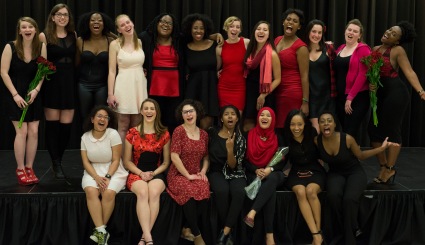 Featured is the cast of The Vagina Monologues UMD 2015. (Ryan Eskalis/Bloc Reporter) 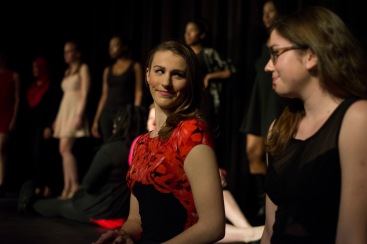 Erin Klatt (left), one of the co-coordinators for “The Vagina Monologues” at UMD, sits with Carly Moore (right) on stage for the skit “The Woman who Loved to Make Vaginas Happy.” (Ryan Eskalis/Bloc Reporter) 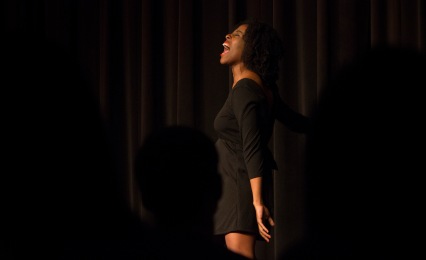 Ceaira Thomas performs “I was There in the Room.” Her character expresses exuberance for the act of a woman giving birth. (Ryan Eskalis/Bloc Reporter)

Zoe Wasserman performs “Because He Liked to Look at It,” a skit in which a woman has a good time with a man. (Ryan Eskalis/Bloc Reporter)

Dressed in all black with a red beret, the official colors of the Monologues movement, Taylor stormed the stage in her high heels, followed by a militia of 15 other actresses who yelled and snapped in agreement.

Taylor spewed frustrations about the pains of annual pelvic exams, the discomfort of thong underwear and the injustice of tampons with conviction.

“You need to work with the vagina,” Taylor protested. “Introduce it to things. Prepare the way. That’s what foreplay’s all about. You got to convince my vagina. Seduce my vagina. Engage my vagina’s trust.”

“You can’t do that with a dry wad of fucking cotton,” she said.

Though Taylor’s performance was convincing and an undeniable highlight of the production, she admitted not only had she never played an aggressive role, but also “My Angry Vagina” was not her first choice.

“When I saw that I was [doing] ‘My Angry Vagina,’ I was kind of put off,” Taylor said, who said she did not want to portray the stereotypical angry black woman. “I didn’t want the audience to be like ‘Of course she’s the Angry Vagina’ … But I’m very passionate, so I felt like I could try to take that away. I tried to be angry, but passionate and loving, too.”

Just as enthralling was “Vagina Workshop,” a piece about a woman who first discovers her “down there [special place]” in a workshop about vaginas.

Though people who are most familiar with Monologues are accustomed to hearing this performance done in a British accent, student actresses Camille Veselka and Carly Moore decided to reinvent the piece, mixing what sophomore economics major Veselka refers to as “classy” and “trashy.”

“I’m just not good at a British accent, but I am good at an obnoxious New Jersey accent,” said Veselka, who performed for her second time in Monologues. “I told Carly, you do it classy, and I’ll just do it as [trashy] as I can. I guess we were trying to do some sort of juxtaposition. I really like playing those types of outlandish characters.”

With Veselka and Moore playing vagina novices sprawled out on the stage floor, examining their “down there’s” with animated facial expressions and gestures and humorous mispronunciations of the word clitoris – their piece “Vagina Workshop” received the most snickers.

The masterminds behind the production, senior government and political science and international development major Moriah Ray, and sophomore psychology major Rebecca Bradley, took a hiatus from acting in the Monologues to co-direct this semester’s performance.

“Seeing everything come together, it was really rewarding to see how the girls have grown from the day of the audition until now,” said Ray, who has been working hard with the actresses since last semester.

The transition from being actresses to directors was one of the biggest challenges for the directors, Bradley said.

“We both just performed with these women last year and now all of a sudden, we’re giving them direction,” Bradley said. “It was difficult, especially because I’m a sophomore, and we’re directing seniors, close friends, people we don’t know. There was a lot of shakiness at the beginning, but we had to get comfortable with our roles as directors.”

“I’m used to acting and being in it, and having to know my lines and being on time,” Ray said. “Now seeing the other side is really crazy. There’s so much that goes into it that, as an actress, you don’t think about because someone else is handling it.”

The co-directors said  they were pleased to see more members in the audience than expected.The performance earned more than $800 from ticket sales in its opening night alone, which benefit the university’s CARE’s victim assistance fund, aiding survivors of sexual assault and violence.

Brittany Britto is a graduate student and can be reached at bbrittoa@gmail.com.